Lucky Block makes fastest run up to a $1 billion market cap in the history of crypto. We explain why there’s still plenty of time to buy.

It has taken the lottery platform a little over three weeks to hit the $1 billion level. It happened at around 8pm in the European session, leading to cries of “we ate the zero” on the 40-000-strong Telegram chat.

Priced at just above $0.01, it proved to be a sell signal for some, although with every dip the ranks of those looking to buy Lucky Block swells.

One large holder was triggered into selling, leading to a sharp fall in the price to the $0.0060s, only for it to recover as quickly as it had fallen. Within 30 mins the price was back up into the $0.0090s.

Below is a screenshot of what is the first transaction at the $1 billion market cap threshold.

The Lucky Block price move was so fleeting that many charts have not included the $0.01 price point in their candles: 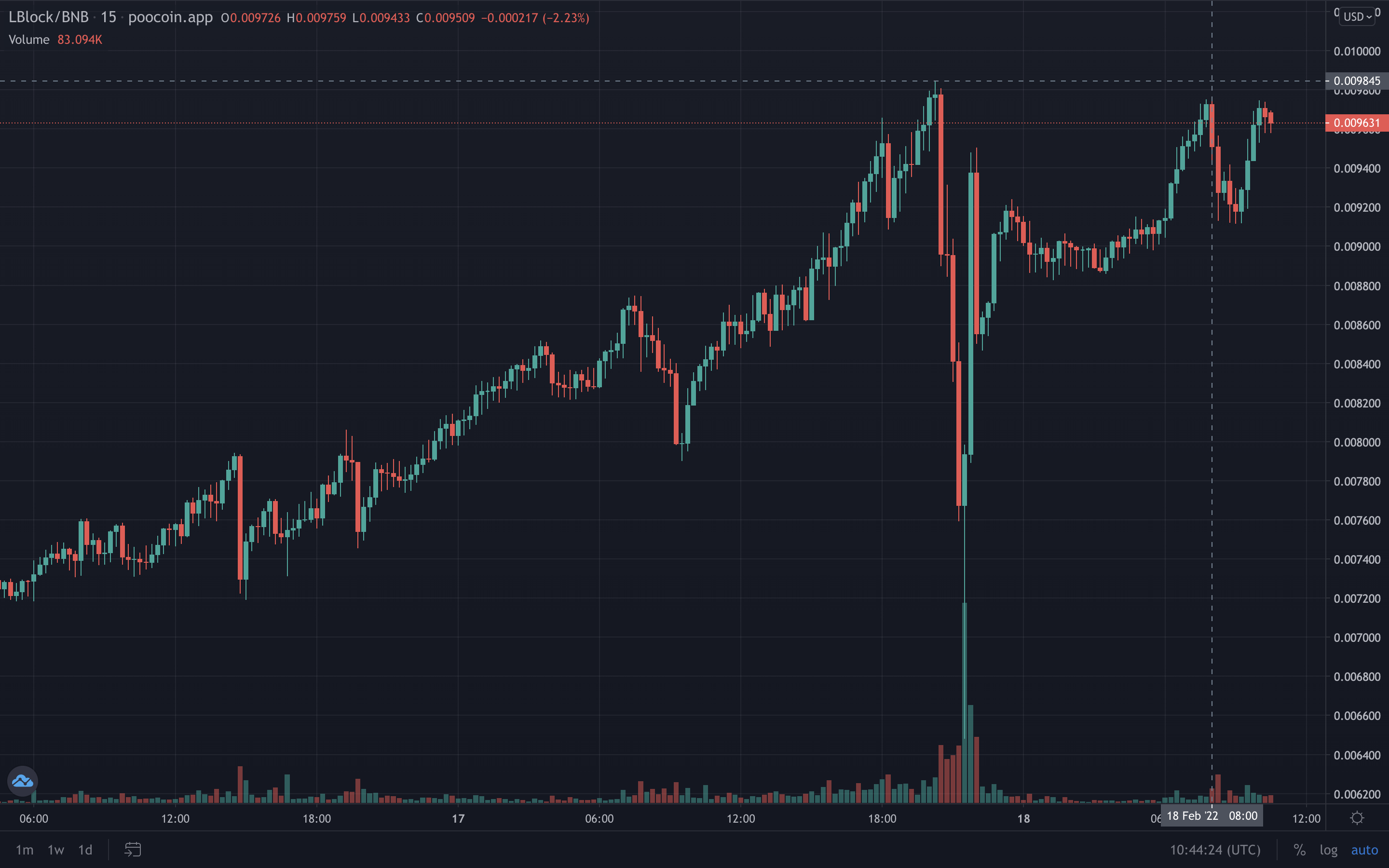 With the launch of the lottery app due on 21 March and the first of the daily draws set for Friday 25 March, the buying pressure behind the token is likely to build. Lucky Block is shaping up to be the best cryptocurrency to buy in 2022.

At the centre of Lucky Block’s appeal is not just its utility as the only currency that can purchase lottery tickets, and the many benefits a blockchain system has over traditional promoters, but also its unique token distribution system.

Every time the token is sold on an exchange a tax is paid, amounting to 12% of the sum being transacted, of which 4% goes directly into the lottery pool for prizes. The lottery pool is now valued at nearly $7 million.

To date, all of the funding for the lottery poll has come from the tax on the Pancakeswap decentralised exchange.

The project has a number of centralised exchange listings in the pipeline in addition to LBank, where LBLOCK listed a week ago. In a Telegram post today it said it is ongoing discussions with “numerous exchanges”, with much of that seeming to be centred around how to implement its 12% tax on sales.

LBank had apparently agreed to implement a tax on transfers from DEX to CEX in order to stop people trying to avoid the sales tax on Pancakeswap, but this is not currently operative.

But in a communication from the Lucky Block team today, the news was shared that LBank will instead implement a tax of 6% on both sells and buys. It has not been able to facilitate a tax on deposits (transfers) from Pancakeswap to itself.

The Lucky Block transaction fee – or tax – is crucial to the ecosystem but it seems tat each exchange is offering different ways of implementing it or not implementing it at all.

A poll is being conducted on the Lucky Block Telegram to canvas the opinions of community members regarding which route to go down i terms of which exchanges to list on depending on what they are willing to offer regarding accommodating the tax.

What is Lucky Block – the tip of the year?

But don’t worry, you’re not too late to the party. The global lottery market is valued at around $330 billion, which gives Lucky Block a huge addressable market.

The project raised over $5,700,000 during Pre-Sale. Most of that amount has been allocated to marketing.

Not only that, of the 12% tax that is applied when the coin is sold, 4% is distributed back into a marketing pool. This has given Lucky Block the war chest to play in the big league.

We hear the team is now scoping out major sponsorships with Tier 1 athletes, sports teams and A-List celebrities to raise huge awareness to the token.

Harnessing the brand power of celebrities is a sure-fire way of building a user base for crypto projects, and that’s exactly what Lucky Block is going to do.

Crypto.com recently hired actor Matt Damon to be the face of its brand. From the world of rugby, South African coach Rassie Erasmus is a backer of crypto app Luno, while in European football Socios’s Chiliz coin is powering fan tokens.

Barcelona football star Gerard Piqué is just one of the many footballers backing crypto projects, in his case the blockchain-based Sorare fantasy football game.

Yet another example is NBA star Kevin Durrant, who has signed a sponsorship deal with Coinbase… we could go on.

4 things you should know about Lucky Block

This is why we think Lucky Block is probably the best cryptocurrency to buy in 2022:

In order to buy Lucky Block or find out more, join their Telegram Group – https://t.me/LuckyBlockChainTG